‘If this game involves straws, sellotape and blue tac I am going home’

This blog has been written by Dojo Customer Support Manager and inventor of Dojo Bridge building, Chris.

For the second half of Market Dojo’s Christmas Team Day, I was asked to create a unique team-building activity for everyone to participate in. My idea was to go down the usual route of ‘Building a Bridge’ BUT with a procurement twist…

My idea for the task was inspired by my experience at Market Dojo and the regularity in which I see auctions taking place for materials. My idea was to use our eSourcing platform Market Dojo, to create events/auctions for teams to purchase their building materials. Generally, the winners of these games are the bridges that can hold the most weight, but for us, we would be taking into account the weight/cost.

When I announced that we would we Building a Bridge one of my colleagues was heard to say, ‘If this involves straws, sellotape and blue-tac I will be going home’. Luckily they stayed long enough to learn the twist and participate!

Firstly we split everyone into teams of 4 and then invited them to an RFQ. Within this RFQ we included an overview of the event. I had the idea of doing this as the suppliers who use our tool would be in the same scenario when participating in an event.

The information we included was extremely vague, the measurements needed for the bridge were not included, just a photo of the distance needed. I also had a Lego Duplo train which the bridges were required to support and again we kept this vague with just a photo. I intentionally did this to encourage teams to use our ‘Messages’ tab to contact the host to find out what these were, again very similar to the experience our suppliers have.

Then we had the RFQ. We told the teams within the overview that they had £300 to spend and how the winners would be determined by weight/cost. The exact RFQ can be seen below.

Unlike a normal RFQ, I predetermined the price of each item and then the teams selected how many units they wanted, to ensure everyone would be paying the same price for each item. Once the RFQ ended, teams were then given their materials and started the build!

What I found very interesting within this auction was how every team had different ideas and designs. One team did not read the overview and spent their £300 budget straight away whereas other teams spent around the £100 on their materials.

As the building was taking place we ran 3 additional forward auctions., The first was for the measurements of the length of the bridge needed and a tape measure and another was for hiring the Lego Duplo set. The last auction to take place was the interesting one!

This auction was an ‘End of Clearance’ sale. I knew beforehand that teams would be wanting more materials for their bridge to make it stronger whilst keeping in mind cost.

Please see below a graph to show the bids that were placed for one of the lots in the auction: 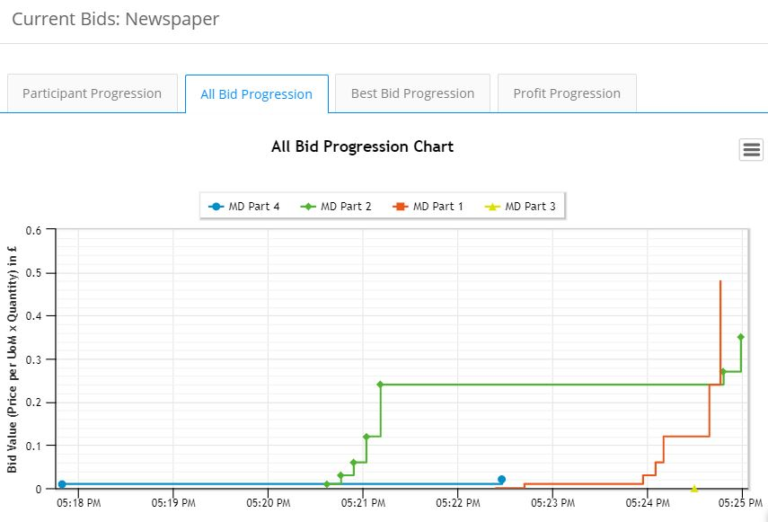 Once this auction finished the teams had 10 minutes left until it was time to test!

When it came to testing there was a lot of competition between all the teams and individuals, even from our colleague who wanted to previously go home!

At the end of testing, we finally had a winner!

Just how we wanted, 2 teams bridges supported the most weight which then meant the bridges came down to cost!

I asked some of my colleagues afterwards if they enjoyed the game and I got very positive feedback and the majority all enjoyed the aspect of procurement within the event!

Using the procurement aspect and the Market Dojo tool I was able to create a game that is generally seen as ‘boring and rubbish’ into a highly competitive team game!

If you like the sound of TeamBuildingDojo please get in touch!