We are proud to be able to introduce Multi-Stage RFQs as a part of our flagship eSourcing tool, allowing hosts more flexibility than ever over their sourcing process.

A full webinar was previously recorded by our Product Manager going through the functionality and other items released in 2019, this can be found here or on the webinar hub.

Here is a summary of the functionality:

After the first round of RFQ has been completed, in the same manner as existing functionality, host users will now see an option to ‘Add another Round’, this is also available under the Further Actions drop-down.

On click, users can configure; the bid deadline for this new round, whether participants should be able to view their rank as it was at the end of the previous round, and the participants to be included. This window includes some basic information on the bids that have been made by each participant, to inform decisions on participant selection.

All participants invited will be sent a notification of this new round of bidding and will be able to access the event as shown below in the Participant View section. 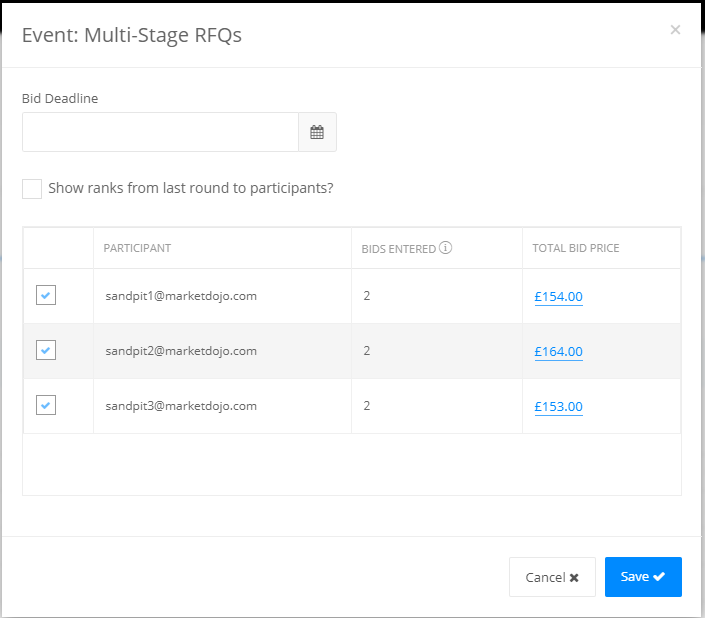 Participants can be added to the event when in edit mode at any time from the Participants tab, they will then be able to enter bids within the current round, or be invited to the new round if there is not currently one open.

Once a second round has been opened, hosts can view bids in a number of ways.

By clicking on the ‘Best Overall’ option, the best bid from each participant across all rounds will be shown.

Alternatively, by using the ‘View Round’ drop-down, the bids from within a particular RFQ round can be examined, with the best bid columns reflecting that round only. 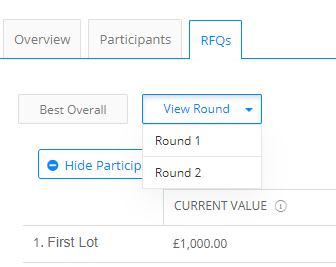 As ranking is available to be shown to participants upon creating a new round, the ranks are only calculated at the end of the round, thus preventing participants seeing more up-to-date information. Hosts can update the bid deadline for a round at any time from the Settings tab, up until the deadline time has passed, at which point a new round must be created for additional bidding.

By clicking on a participant name within the RFQ tab, users will be able to view how their bids against each lot progressed between rounds. 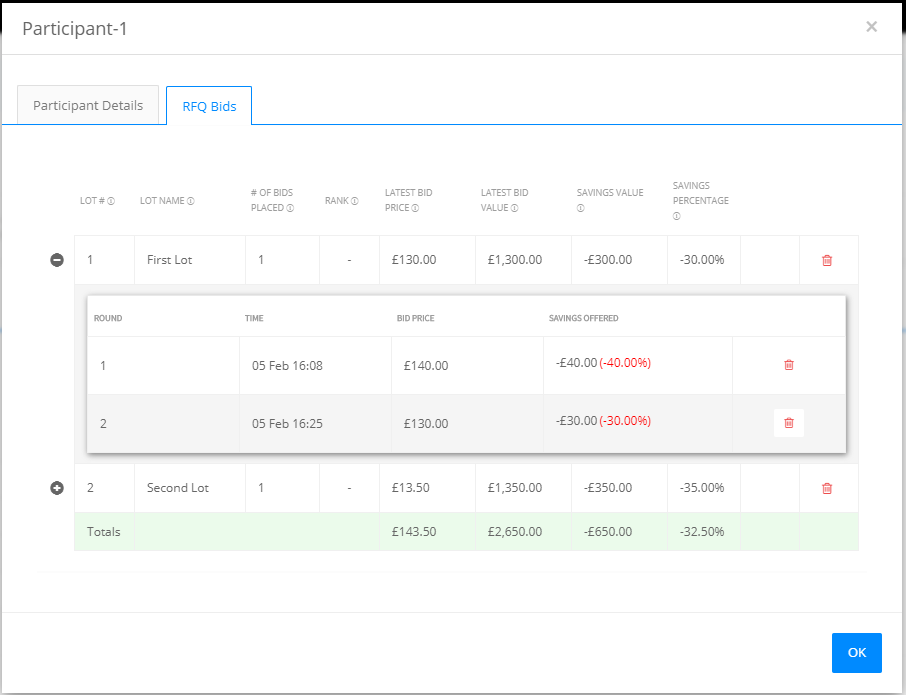 At the end of the second RFQ round, hosts can again choose to open up a new RFQ round, and may continue to do this until they have reached a satisfactory conclusion.

When a new round of RFQ is created, each participant will receive an email notification including a link back to the event.

Navigating to the RFQ tab, they will be shown the open round of bidding by default, however they may choose to go back and review previous rounds’ bids using the drop-down.

If selected by the host, participants will be able to view their rank from the previous round against each lot bid. This will subsequently be removed if they choose to bid against any lot, so as to avoid confusion.

Participants are not forced to place a bid against every lot in every round of RFQ, and the host will be able to see any missing bids from within that round’s view.