2015 West of England Business of the Year Awards

A massive thanks to PWC and the invitation to the annual awards.  A very well run black tie event in the  Passenger Shed next to Temple Meads station with guest presenter Ian Axton of ITV West.

There was a great intro by the Wallace & Gromit’s Children’s Charity which is a national charity raising funds to improve the lives of sick children in hospitals and hospices throughout the UK .  Collections we made during then event with the promise to embarrass some PWC folk by getting them dressed up as sheep for the end of the night. It was the precursor to more than a few Shauns ready to appear in the city.  [Please give generously]

There were also some deserving finalists and in the two categories the final winners were the Devon Air Ambulance Trust and also Botts Limited.  The event was accompanied by some videos of each of the finalists that we’ll have to admit were very professionally constructed and the event was also to be broadcast on ITV West  [I am sure we will be household names very soon!].

Unfortunately this was not the year of the Dojo but we have high hopes for the next. 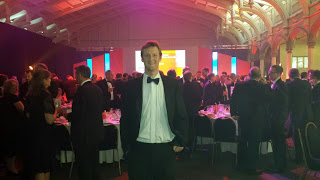