3 ways eSourcing could benefit the Olympics

The Olympics, that time once every four years you become heavily emotionally invested in sports that you forgot had existed, or do not understand the rules, or in our office, embroiled in a debate over whether synchronised diving requires more skill than clay pigeon shooting (it does).

Whilst the world marvels, and rightly so, at the athletes who have invested the last four years of their life, and considerably longer, into ensuring that they are in peak condition to go for gold, there has been an undercurrent of issues surrounding the Rio Olympics (I’ll come onto these shortly). Before working for Market Dojo, I would have taken a moment or two to reflect how bad these issues were and moved on, but now I feel compelled to write a blog article on how an eSourcing system could have helped to prevent these issues.

Corruption
Brazil has had it’s fair share of corruption allegations in recent years. The scandal concerning national oil company Petrobras has seen over 100 people arrested for their alleged involvement and now Reuters has reported that Brazilian investigators are looking into possible corruption around the staging of the Olympic games to include all venues and services. The use of an eSourcing tool would make the tender process more transparent; providing a clearer framework of how an organisation is going to market for goods or services, with a clear audit history of questionnaire responses and bids.

Thousands of protesters march to the National Congress building in Brasilia

Overbudget
A recent Oxford University study found that the Rio Olympics is $1.6 billion in cost overruns, equivalent to 50% over budget. Whilst there are many ongoing procurement practices, for example, contract management, KPI’s, etc. which may have helped to curb these costs, the use of an eSourcing tool at the front end may also have assisted. How could an eSourcing tool help with this? Simple, by finding the market price in the first place. At Market Dojo, we’ve seen that the use alone of an eSourcing tool gives the impression to suppliers of a more professional experience, and suppliers tend to ‘sharpen their pencils’, even with their RFQ bids. Taking an event to a reverse auction can generate further savings.

Ticket Allocation
If you’ve watched any of the Olympics so far, you may have noticed that there are lots of empty seats. Rio’s ticketing director has stated that 78% of the 7.5 million tickets have now gone. With 1.1 million tickets left to sell, it’s not too late to use Market Dojo to run forward auctions on the remaining tickets!

The Olympics is synonymous with the celebration of the human spirit; where lifelong dreams become reality and even a place where political differences can be put aside in the name of sport. Whilst there are a lot of other issues, for now, let’s sit back, and enjoy the spectacle of the world’s best competing on the largest stage. 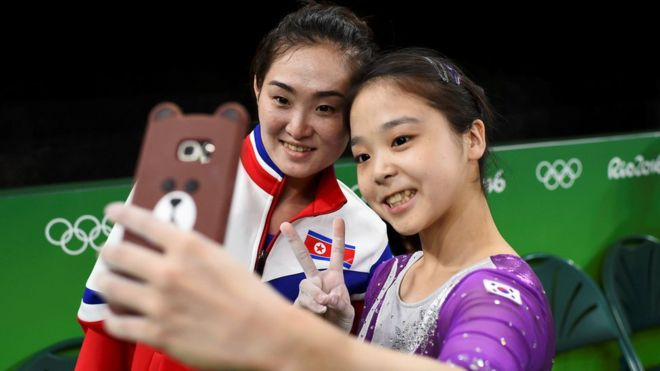 Lee Eun-Ju of South Korea takes a selfie with Hong Un Jong of North Korea in a gymnastics practise session during the Olympics in Brazil.