This blog has been written for Market Dojo by Procurement Insights’ Jon Hansen, ahead of our upcoming webinar Mapping success: Taking digital transformation from concept to realization Part 2. As the Editor and lead writer for the Procurement Insights Blog, Jon Hansen has written nearly 3,000 articles and papers; as well as five books on subjects as diverse as supply chain practice, public sector policy, emerging business trends and social media.

Many years ago, following a lecture at a procurement conference a senior executive from a Fortune 500 company told me about the very first time they used Ariba to run a reverse auction.

In talking frankly about the company’s initial experiences with the e-procurement platform, the exec said that after enthusiastically putting out a request for bids, they were more than a little surprised when they did not receive even one response from vendors.

Of course, this exec and their company were not alone in those early days of the technological transformation of the procurement process.

Not long after that discussion, I received an invitation to deliver a keynote on technology, including reverse auctions at the PTDA’s 2005 annual conference. After a stirring introduction, I took my place at the podium in front of approximately 250 to 300 people and shared with them my take on the digital future of procurement.

It was an interesting morning.

Apparently and unbeknown to me, when they were booking me for the conference, organizers did not tell my people about the situation into which I would be walking. Specifically, the subject of e-procurement was a sore point with most of the “suppliers” in attendance and that I should be “prepared” for a little bit of a rough ride.

To start, and not long into my presentation, I came to two very important realizations. The first is that there was a reason why the front stage did not have a convenient point of exit or escape, and second, that there was a high probability that there would be a show of pitchforks and torches.

Apparently, and from a supplier standpoint, using an e-procurement platform to acquire goods and services was a threat to their business’ future. They saw it as a tool in which the sole purpose was to play one supplier off against the other to drive down costs.

It was also obvious to me those 15 long years ago that no matter how amazing the technology, if you could not leverage it to identify and engage suppliers effectively, then what was the point.

So, why am I writing about experiences from 15 years ago, today?

Because during a recent discussion with the Head of Purchasing at Irdeto Corne’ Dercksen it is apparent that times have changed – at least in some cases.

Over the past 50 plus years, Irdeto has evolved into a global enterprise servicing diverse industry sectors. For example, one of their clients is Hyundai, who uses its technology to protect the automaker’s keyless entry system.

In preparing for an upcoming webinar on April 7th for which Corne’ will be a panelist, he talked about Irdeto’s success in leveraging technology to establish a new supply network in regions where there had little in the way of supplier intelligence. In other words, how technology can be an important tool in finding and attracting quality suppliers.

According to the following graphic from the Deloitte 2019 Global CPO Survey, supplier management is still problematic for many organizations even today. 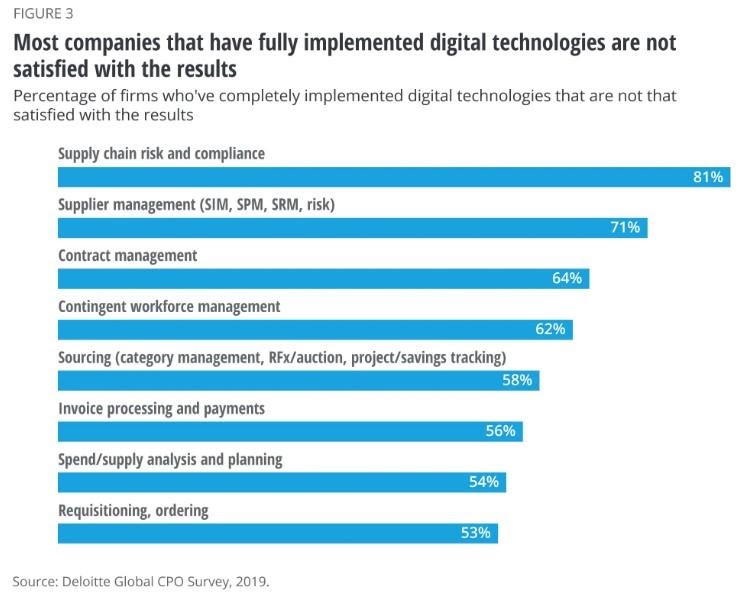 Suffice to say, both Corne’ and Irdeto success means that they have a wealth of knowledge regarding not only effective supplier development in the digital age, but the transformation of the overall supply chain.

With this in mind, use the following link to join me on the 7th of April as we learn more about Irdeto’s digital success.