Quite often, especially with new clients who haven’t made use of reverse auctions in their purchasing before, we’re asked to give assistance on the setup of a few initial events. Partly this helps build confidence, but mostly this allows companies who may be on the fence about the value of applying an auction-backed approach to their procurement process to do so while taking full advantage of our accumulated years of experience in fine tuning for greatest effect.

In the seven years since Market Dojo was established, we have hosted nearly twenty thousand reverse auctions, either Ranked or Open, for all sorts of products from global freight to printer paper. As with any large dataset, some simple rules of thumb eventually became very clear.

The first and most important one is that unless you have a very small selection of hand-picked suppliers, there are always some who ignore tenders. Perhaps they’re busy, perhaps it’s too small, perhaps their head of sales is on holiday and hasn’t arranged email forwarding. Whatever the reason, we see two main peaks in our histogram for response rates: around 100% which largely corresponds to small auctions of only a few participants for very specific requirements, and around 20% which is much closer to both the median and mean for this grouping.

What does this mean for your next RFQ or auction? Unless you’re willing to put in the time and energy to chase each of the invited participants, or you’re a very big fish procuring from a fairly small pond, you will always be better off inviting more potential suppliers. A median response rate of 31% means that if you only invite three suppliers, statistically you’re likely to get a grand total of one bid. Not exactly the cut-throat competition driving heavy savings we’re all after.

It would be easy to think, looking at the previous data, that inviting just four or five suppliers would mean there was some competition and drive prices down. While that’s certainly true to an extent, looking at the savings figures directly we see a broader story. On the whole, auctions drive savings across the board, as you might expect by giving suppliers a rank and having them compete directly with each other. The degree to which this is true, however, varies with the number invited.

The difference between inviting three participants and inviting ten participants could be 12 percentage points, or 50% additional savings. The message after that, generally followed by our clients, is without question “go big or go home”. There is no cost per participant in Market Dojo, and no need to read hundreds of emails, so it is entirely feasible and advisable to go out to the entire known market and get the best possible price. This is borne out by the figures; the number of data points here is naturally somewhat lower than for the smaller events, but overall we see an additional two percentage points of savings for our very largest events. Five is far better than three, ten far better than five, but if you happen to have the contact details of a few hundred suppliers it could be well worth the time to upload the list and bring them all in to negotiate. 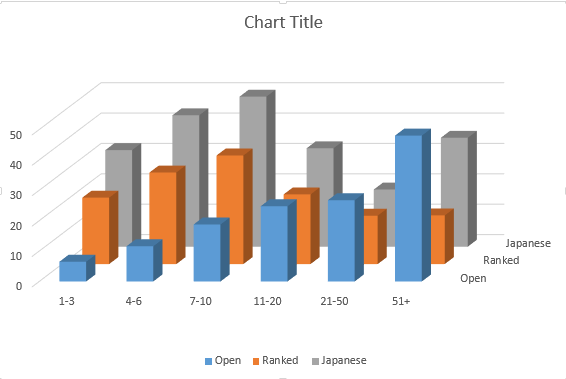 Taking the data from the previous graph and carving it by event type, we start to see the importance of choosing the auction type correctly based on market size. If your market is vast then an open auction is a great option, and the relative rankings are less important. If it’s somewhat more restricted you’d do well to consider a ranked auction to have your suppliers sharpen their pencils a little.

The data for Japanese auctions is somewhat less reliable, as fewer than 5% of our events are of that style. We advise them when we have high confidence that they will drive the highest savings, and the payoff when they’re the right tool for the job can be considerable.

In keeping with the theme of pressing the competition aspect, we see a similar story with a different slice of the data. Running an RFQ will generally net savings all by itself, but failing to iterate on the process can leave money on the table. Running an auction represents a mean four percentage points additional savings, and adding ranks to that inspires price drops of a further three. Given the mean savings for an RFQ is 18% that’s a significant improvement.

Maximising the number of invited participants who actually turn up and bid is vital to good market access. Starting an event on a Friday or Saturday, even if you’re a company in a country for whom Saturday is a working day, can be detrimental to uptake. Starting on a Monday when most of the world is fresh can give you an extra participant or two, which might be all you need to start a bidding war.

I leave you with this nice little chart. Over the last seven years several thousand hosts have run over 21,000 events. We’ve seen savings from nothing at all to 80%, and event populations from one to hundreds of participants. All this has given us collective decades of experience in optimising events for maximum return.

We can provide hints, and our resources page can take you further, but if you would like your auctions designed and run by expert eyes give our Customer Success team a call.