How to Create a Sourcing Event Using Market Dojo

If you’re new to eSourcing and unsure of where to start with creating an event, this article from Tony Verheggen should help clear things up. As the Sourcing Process Owner at Air Products for 10+ years, Tony is a true expert in his field having run many auctions. He kindly went through the process of creating an event on our eSourcing platform and knocked up this article to give you an understanding of how simple eSourcing can be. 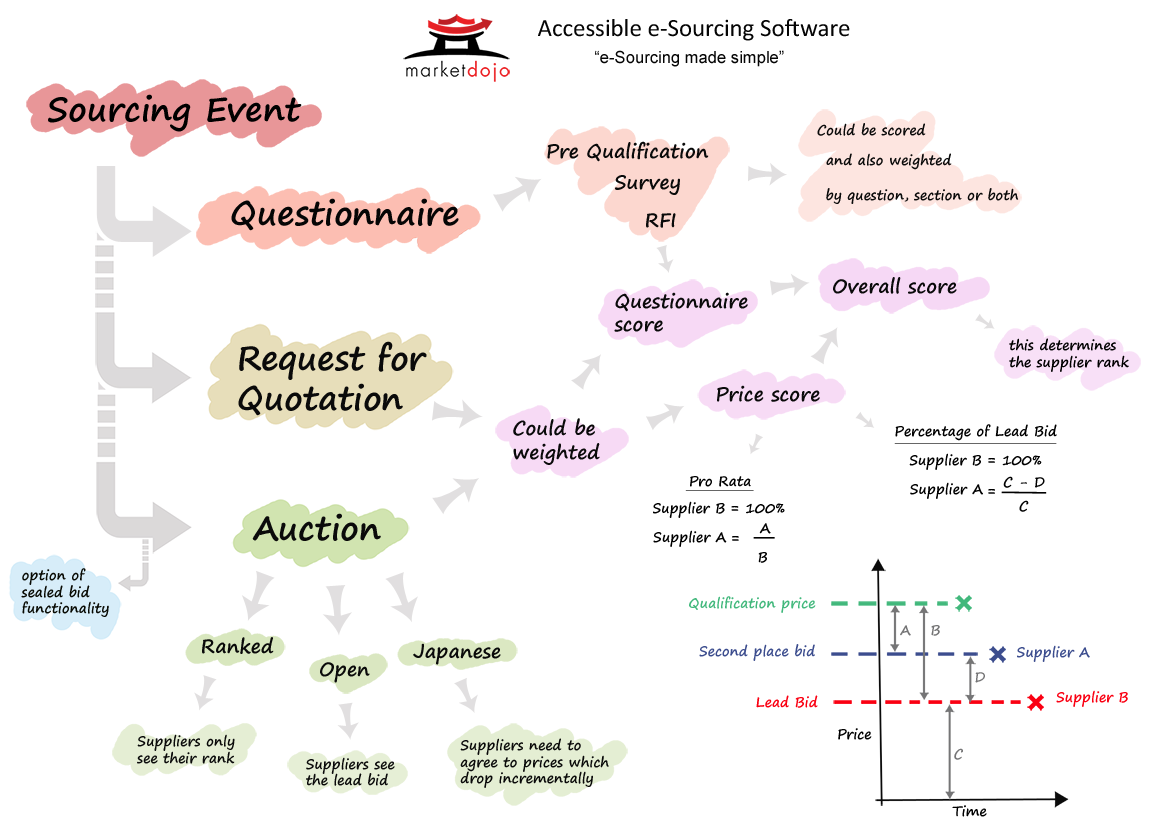 Step 1 – Creating the Questionnaire
To create a questionnaire you will need to check the following checkbox:

Questionnaires constructed properly can save you time and money by getting the answers you need. Here are a few examples of why one may use a questionnaire for a particular type of tender, with some example case studies of where these have been used within Market Dojo.

Doing the questionnaire before the RFQ or Auction is preferred because getting the answers later after the pricing is settled can lead to re-opening pricing discussions. This destabilizes pricing, because now potentially you are asking the supplier for something different or additional, changing the scope or specification. Change may be unavoidable, but much of it is preventable. Settle all questions first before pricing.

Additionally, there is a checkbox each for scoring and weights.

In early questionnaires you create, it is best to leave these unchecked, until you are thoroughly familiar with how they work, and have practiced in the sandpit. This is a more advanced functionality, that helps resolve subjective differences in questions as well as internal team imbalances and avoid disagreements. For example, a technical team member may weight the technical questions more than the commercial questions while a commercial team member might do the reverse. As the Purchasing Leader, your role is to make sure the team works together and achieves an objective result they can live with. Scores and weights help do this. But in most cases where these are not concerns, it is best to begin creating questionnaires without scores and weights to simply gain maximum information from your suppliers. Use scores and weights to settle disagreements objectively.

Once you have received answers back from the Questionnaire to help you thoroughly define the specification or scope of work, now you are ready for the next stage.

Step 2 – Request for Quotation (RFQ)
The RFQ is used to define pricing in various stages of the process. You can do an RFQ to define budgetary estimates so you can plan ahead. Also, you can obtain early estimates of pricing to establish where the market price is. Or you can use the RFQ to obtain confirmation of the final pricing, in which case if no auction is done, it would be the final stage. It depends on what your strategy is and often what kind of time pressure you are under. The RFQ can also be used to define where the auction prices will start from. Usually you want to know the range of prices among suppliers before you go to auction, Then the auction will use this information to set the initial pricing. This information is essential in choosing the right kind of auction.

Typically an RFQ also includes questions that were not on the questionnaire. These might ask suppliers for clarification of answers provided in the questionnaire, or obtain agreement to final terms with their final bid. If you are in a hurry, or what you are buying is well defined, sometimes a quick RFQ can include simply an attachment with the specifications, and a terms sheet and a single item requesting pricing. Turnaround times for these kinds of RFQs can be very rapid.
Qualification bids

If you progress from a RFQ, straight to an Open or Ranked Auction, then their bids will not be pulled through. This is because during an eRFQ process, if there is no mention of an eAuction it would be unfair to assume those bids will be become the suppliers starting bids.

However, if you have an eAuction without an eRFQ process, then you will have a qualification bid process. This is exactly the same as a RFQ process but the bids will be pulled through as the initial bids in a open or ranked eAuction. The benefit of these initial bids is that it lets you understand if the suppliers can log on, bid in the system, find mistakes in the specification, understand initial savings and let you know if your strategy is correct. 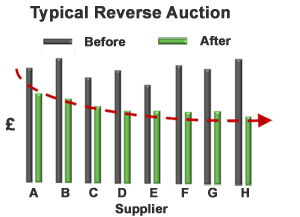 The final stage is an auction. There are several types of auctions available through Market Dojo which you may select from. We’ll cover each type of auction separately. They are: Ranked, Open and Japanese auctions. Let’s cover them one at a time and take care to examine the differences so you know which to use and when to use it.

Direction of price in a reverse auction driven by competition.

Ranked Auctions
These type of auctions receive multiple bids from suppliers and then as the bids come in, suppliers are ranked from lowest bid to highest bid. The only information revealed to all suppliers is his/her rank in the bidding. The key then for the supplier is to bid lower and lower to improve his rank until he is in first place. If the supplier remains in 1st place at the end of the auction, then he is considered the winner of the auction.

The advantage of this kind of auction is that revealing rank creates a very dynamic and highly competitive atmosphere where suppliers must bid aggressively to discover and win the lead. If many suppliers are bidding, it can lead to true market price discovery. The other advantage is that it communicates to suppliers that there are many qualified suppliers who want this business. Sometimes this message is critical to convincing suppliers, particularly the incumbent supplier that this material or service is a commodity, not a specialty and hence deserves commodity pricing not premium pricing. Often times the incumbent will be in denial about the possibility that he will lose the business to others, even if the buyer tells him this is so. But seeing is believing, and when the incumbent sees he is in 9th place, it goes a long way toward changing denial into a willingness to negotiate and reduce his price. Sometimes it even takes more than one auction loss or loss of the business before the incumbent changes his view of pricing.
One of the disadvantages of this type of auction is that you need to have 3 or more suppliers. If you have fewer, it leads to less vigorous bidding action. Since the price is hidden, another disadvantage is that it takes somewhat longer for the bidders to find and reach the lead. They may be cautious and try and creep up on the lead with many small bids, rather than jumping to the lead with one large bid, because they don’t want to overshoot the lead by a large margin. They may also decide that second place is good enough, hoping that the lead bidder is later disqualified in some way, leaving them to pick up the business.

Open Auctions
In these types of auctions the suppliers see the lowest bid alongside their own bid. This allows them to see and take the lead by bidding lower immediately. They know exactly what they need to do to take the lead. This speeds up the pace of the auction as long as the suppliers feel they can meet or beat this price. However as suppliers drop out, the competition may slow.
One of the advantages this auction type offers is that suppliers don’t know if they are bidding against one supplier or many other suppliers. You can run this style of auction with only 2 suppliers. If your incumbent supplier already has a very low price and the other suppliers have much higher pricing, this auction style gives no incentive to the incumbent to move even lower. He can take first place, and may remain there for the entire auction. So it is important to have some idea how far apart the incumbent is from the other suppliers. Also, by running this type of auction, you may reveal to the incumbent, not only is he the lowest price, but he may learn that he is significantly lower if none of the competitors can beat his bid. This may be information you do not want him to discover.

Japanese Auctions
In this type of auction, the price ratchets down by a fixed increment every few minutes and the suppliers are presented with the offer price and an accept/decline button to push. As the auction proceeds and the price drops they are asked to accept or decline each incremental price shown. Continually accepting the prices shown means that the auction for that supplier will continue. If the price drops below a price the supplier can accept, he must push the decline button. If the supplier declines, fails to accept, or time runs out, the auction ends for that supplier. It does not however end for other suppliers. They may continue to accept the pricing as it lowers until they too drop out of the auction. The auction ends when all suppliers have dropped out, or time runs out.

This type of auction reveals nothing to other suppliers, which is important when you do not want suppliers to discover market information or their position relative to the competition. It provides an incentive to all suppliers to accept bids until they no longer can. This overcomes one of the disadvantages mentioned in Open bid auctions. It can also be run when there only a few suppliers available. It does not however necessarily convince suppliers, especially the incumbent that they have significant competition in the marketplace. They may even suspect they are bidding against themselves. One of the other advantages over a ranked event is that a Japanese eAuction will help prevent bid shadowing. This is where an incumbent will follow first place to be close but not to win the event knowing that a switching cost might negate some benefits of a small price saving. A Japanese auction gives no indication to the incumbent how the others are doing.

Summary
It is important to decide in advance what information you want to reveal in auctions before you select the auction type. Also, what kind of market and competition do you want to stimulate during the auction process. Once you have decided these factors, you can select an appropriate auction strategy.