Opportunity Analysis, Supplier Onboarding and how this relates to the Tottenham Hotspur Football Stadium Saga…

Daniel Levy is renowned for being one of the shrewdest Chairmen in English football. In fact, Levy is often dubbed the fiercest negotiator in football worldwide as he had overseen some incredible financial negotiations for Tottenham Hotspur over the past decade including the sale of Gareth Bale for £77M in September 2013 which at the time and still is one of the most lucrative transfer deals in football history.

There is no doubt that Levy is very much key to the financial planning of Tottenham Hotspur which has arguably led them to a great deal of commercial success over recent times however on pitch success remains elusive. Ok, fine, they won a league cup in 2008 and have been able to qualify for the Champions League over the past few years on and off but the headline is that Tottenham are very much the ‘Nearly Men’.

In 2009 Levy had a dream that Tottenham Hotspur would be playing in London’s largest club stadium by the beginning of the 2018/2019 season, which would help grow the clubs’ global profile and be the proud tenants of the only place in London to watch Champions League football (self-proclaimed!). 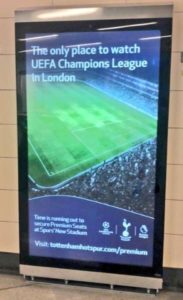 Hilariously, the reality is very different. Despite the foundations for the new stadium taking place in 2012, here we are in October 2018 and news has just broken that the stadium opening date has been pushed back to 2019. Ironically, Tottenham is quite likely to be out of the competition by this point and so perhaps they will need to change their bold statement to fit more realistically with their on-field performances.

So what does this have anything to do with Procurement and why am I writing about this today?

Well, when Mr Levy pressed the big red button on the project and outlined the original cost to be around £400M, a man with this notorious level of acumen and pragmatism would never have envisaged such setbacks in the project.

Tottenham have confirmed the project is now set to cost an additional £200M which, combined with the opening date setback, would no doubt have Mr Levy cursing his luck.

You see, a lot of the reasons for the setbacks are related to a poor approach to the project including unrealistic timescales, unreliable contractors who were awarded the project, costs spiralling out of control and unqualified safety measurements which have ultimately cost Levy his 2018 grand opening.

I, of course, have no doubts that once the stadium is finally completed, it truly will be one of the most spectacular sporting venues in Europe let alone London however it has come at a significant cost to Tottenham and Levy himself.

Levy has been quoted as saying “I wish I was able to confirm an exact opening date and fixture. However, in light of factors completely outside of our control, contractors missing deadlines and possible future unforeseen issues, we are naturally being cautious in respect of our timetable for our test events and official opening game”. His frustration’s apparent, however totally avoidable had they done their due diligence and perhaps been a little more realistic with their project rollout, costs and timescale.

Some of the key elements of any build project include a detailed and thorough approach by means of no doubt completing several procurement exercises such as analysing the opportunity, spend analysis, qualifying prospects, understanding the project timeline and awarding the business. All things that Mr Levy could have benefitted from, optimising his potential by using Market Dojo. Perhaps I will give him a call next time, however, for now, Tottenham will continue to have to foot the bill for renting out Wembley stadium and undoubtedly disappoint their fans further, at least off the pitch…

Finally, anyone that was unfortunate enough to witness the game yesterday between Tottenham and Manchester City would have seen the state of the Wembley pitch, which was left with an NFL hangover. 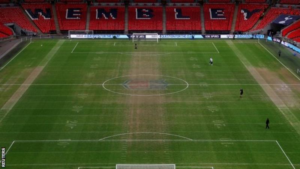 The pitch was in a tragic state, caused by the NFL who had rightly agreed the scheduling of the fixture at Wembley stadium on the premise that Tottenham would have long vacated the facility by the time it took place. Sadly, this was not to be and ironically the state of the pitch probably cost Tottenham a positive result. Next time, Mr Levy, give us a call at Market Dojo 😉

Market Dojo is an eSourcing solutions provider, that offers a range of on-demand and easy to use tools for Sourcing (eRFx and eAuctions), Supplier Onboarding, Category Spend Insight, Buyer-Supplier collaboration and full Enterprise offering (including Savings Tracking, Contracts Management, SPM & SRM). The business is focused on helping procurement professionals save time and money, whilst they work with companies such as Aggreko, Interserve, Travis Perkins, Metroline and Emaar amongst many others.

Connect with the author of this article on LinkedIn  – Adam Collins