Our thoughts from the CIPS Middle East conference 2015

Last week we were generously invited by our partners, ArcBlue, to join their exhibition stand and sponsored dinner at the CIPS Middle East Conference 2015 in Abu Dhabi.

ArcBlue is the sole provider of training services for CIPS in the MENA (Middle East and North Africa) region and have been using our tools as a training aid for their workshops.

It was a fantastic opportunity to explore a new market that we knew little about whilst furthering our partnership.

The trip was immensely aided by two friends and local Emiratis whom I knew from Bristol University.  Quite frankly I was spoiled rotten! 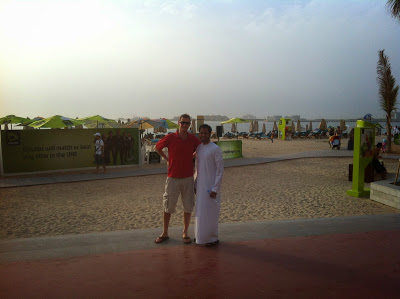 Ali and I posing in front of Marina Beach, Dubai

To begin with my economy flight with Etihad Airways on their brand new Airbus A380 was wonderful, comparable to a business-class flight with Delta Airlines a few years ago.

Upon arrival, despite my friends having a nightmare day where they broke down in their boat, leading to their rescue by the coastguard, and lost their house-keys and a mobile phone (a long story…), they still managed to greet me at the airport.  They had a taxi driver waiting outside, who had unofficially become their chauffeur for the day since their car-keys were also attached to the lost key-chain and it was their driver’s day off!  However, 3 hours of taxi service only set you back about £30, so it was an affordable consolation.

We headed back to their beautiful house equipped with pool, cook and maid – it’s a life one could get very used to!

The evening passed with a lovely dinner in a new venue (an occurance that seems likely to occur on a daily basis given the rate of growth in the city) then onto the bars on Yas Island, home of the Abu Dhabi Grand Prix, before heading home for a sobering dip in the pool before bed. 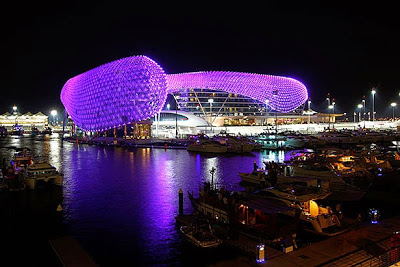 One thing that did strike me was how quiet the city was considering this was the equivalent of a Saturday night out.  There was never a queue in sight, even in the most popular of venues.  This really hit home when the following morning we visited Masdar City, a purpose-built city to showcase renewable energy and a hub for cleantec companies.   Designed as a home for up to 50,000 people, it currently hopes to reach 10,000 inhabitants in the next 3 to 5 years.  As a result, it felt like the luxury set of an apocalypse movie!

On to the CIPS event.  The venue was the impressive Intercontinental Hotel, in which I had the pleasure the previous day of enjoying a business lunch and an afternoon on its private beach.  The event was smaller than those we’ve attended in London but well represented by many senior procurement folk, as expected by an event hosted by the professional body. 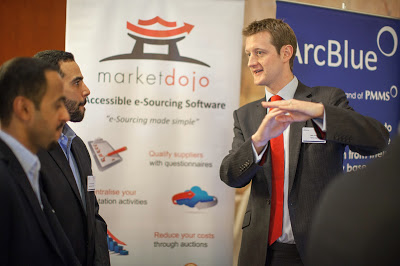 As it happens, I didn’t attend any of the talks, preferring instead to man the stand just in case (which paid dividends late on for one of the most interesting contacts I met all day), so I can’t comment on them.  However David Noble, Duncan Brock and the CIPS President Babs Omotowa were all up on stage along with some very interesting local speakers.

What is great about the CIPS events is that the speakers actively network before and after their talks, so I did at least get to speak to the majority of them at various times of the day.
One general theme was that the majority of public sector organisations were embedded with Oracle.  It appeared the government has encouraged, even perhaps mandated, their various organisations to use it.  An interesting approach, though not one I could see earning any friends if it were to happen here in the UK.

I frequently brought the topic of conversation onto eAuctions and as ever the appetite was divided.  However some  significant public sector entities admitted they plan to run some in the coming months, especially those with individuals in the team who had prior experience.  Reluctance typically came from those who were not familiar with the process, which is just what we see in Europe too.  We could call it the fear of the unknown.  Hopefully some easy, intuitive and on-demand eAuction tools could help ease that fear with little risk 🙂

This year we were also invited to the dinner event, the first we’ve attended.  The CIPS MENA awards were handed out following a groundhog day shortlist process involving Jumeira Group and Etihad Airways.  Amazingly, these two organisations, combined, were shortlisted 12 times out of 9 team awards!  Etihad ended up as the overall winner.  As clients of ArcBlue, it was quite a good evening for them by affiliation too. 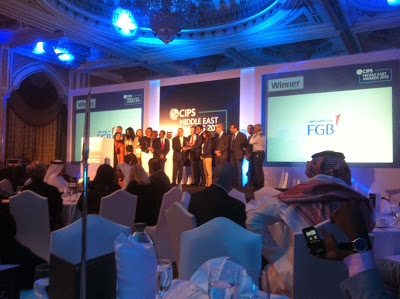 Anyhow, it was a very worthwhile trip with lots of interesting new contacts to keep in touch with, not least our pleasure in meeting more of the ArcBlue team.